Monkey And The Cap Seller Story With Moral In English

The Monkey And The Cap Seller Story With Moral 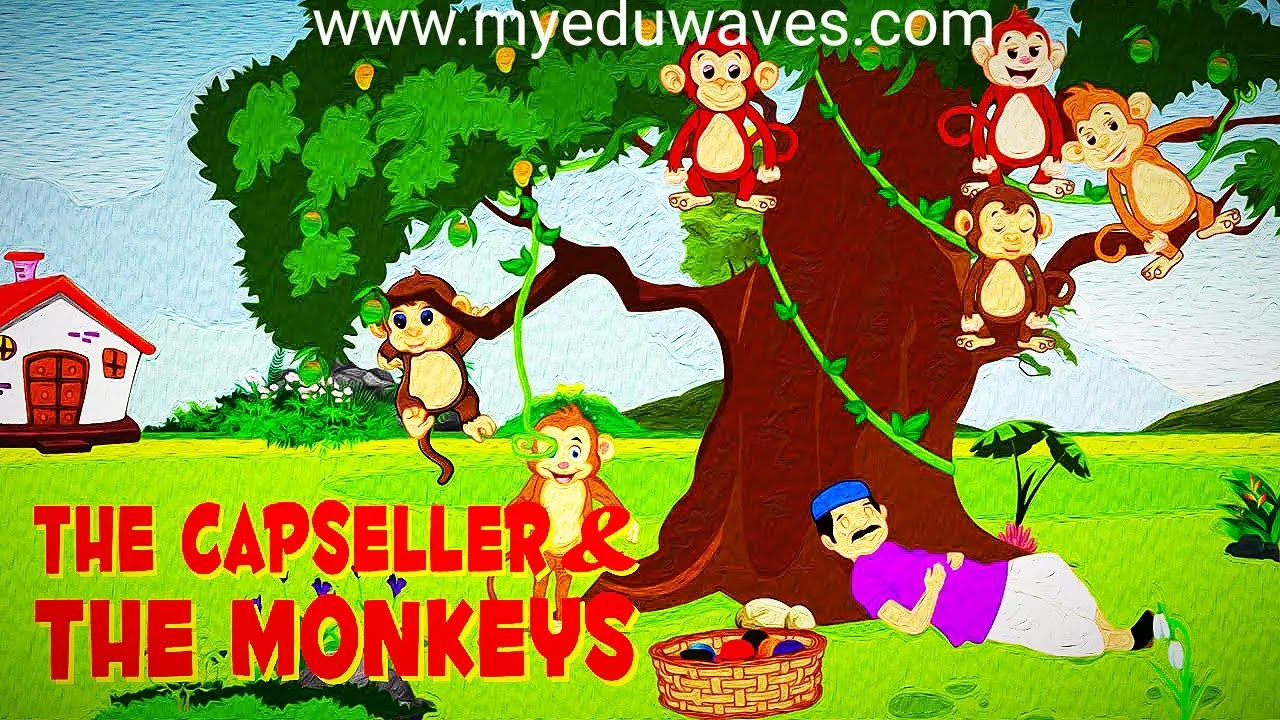 It was long ago. There was a small village near a forest. A poor man lived in that village. He lived in a small hut with his entire family.

He used to sell caps to live for himself and his family. He makes colorful hats himself and took those hats in a big basket and would go out of his house every morning and sell it in the neighboring villages.

Once upon a time, he was selling caps in his neighboring village and going to another village

The path used to go through the forest. It was afternoon, the sun was very strong. The cap seller was very tired. So he sat in the shade of a huge banyan tree to relax. And put aside a basket of colorful caps on one side.

He ate lunch and sat down on the tree. Being tired, he soon started sleeping. Therefore, he laid down his towel and lay down. In a short time, he also got sleep

A large group of monkeys lived on that huge banyan tree in the forest. Seeing colorful hats in the basket, they all came down from the tree and took off the caps and wore them.

Wearing new and colorful hats for the first time, they started jumping, which opened the sleep of the cap seller, sleeping under the tree.

As soon as he opened his eyes, he saw that many monkeys on the banyan tree are jumping around wearing his caps.

When he saw the basket of his caps, he was completely shocked. Because the basket was empty. He got worried and started thinking about getting his caps back from monkeys.

What was it, Cap seller did not take time to understand what was happening? The monkeys were copying the cap-sellar due to their copycat tendency. The monkeys used to repeat what he did

Due to this tendency of the monkey, the hat-seller immediately thought of a solution and took off his cap and threw it in the basket

Seeing what was next, all the monkeys also took caps as per their habit and started throwing them in the basket.

When all the monkeys threw their caps and all the colorful caps were gathered in the basket, the cap-seller quickly picked up his basket and went on from there.

Moral of The Monkey And The Cap Seller

Learning - Every problem is solved with understanding.

Friends, if you liked "The monkey and the cap seller with moral", Please share it. Tell us through comments how did you like the story "The cap seller and the monkey short story in English with moral". Please subscribe for new post information.

Read also:
👉 The Greedy Dog Story
👉 The Crow And The Fox Story

Popular posts from this blog

The Greedy Dog: Short Story In English With Moral And Picture For Kids

The greedy dog story in English: Friends, in this post we are sharing the story of the greedy dog with moral. This story (the greedy dog story in English) is an educative story for children, which teaches them to work with patience and understanding in the time of adversity. This story of a greedy dog is an old story and has always been popular among children. The Greedy Dog: Short Story In English With Moral And Picture For Kids A dog lived in a village. He was always looking for something to eat because he was very greedy. He always wandered here and there in search of food, never filled his stomach. Once upon a time, he was wandering around in search of food as usual, but he could not find food anywhere. In the end, he saw a piece of bone outside a hotel, he quickly grabbed that piece in the mouth and thought to go somewhere in solitude and have fun eating it.    Read Also: The Monkey and The Cap-seller Story He was very happy and wanted to eat it sitting alone, so
Post a Comment
Read more

The Thirsty Crow Story with Moral in English for Kids

Friends, in this post we are sharing the story of a thirsty crow. This story (the thirsty crow story) is an educative story for children, which teaches them to work with patience and understanding in the time of adversity. This story of thirsty crows is an old story and has always been popular among children. The Thirsty Crow Story: Moral Story for Kids in English The Thirsty Crow Story The Thirsty Crow Story It was the hot summer days. A crow was suffering from thirst and was wandering here and there in the search of water. But even after wandering in many places, he did not get water. He was flying too late. He was tired due to constant flying. Meanwhile, his thirst was increasing in the scorching heat. Gradually he started losing his patience. He started to feel that his end time was near. Today he will surely be killed. Now he was not being blown away due to fatigue. He sat on the branch of a tree to rest for some time. There he saw that the pitcher was placed under a nearer
Post a Comment
Read more

Friends, in this post I am sharing the story of an honest woodcutter. This story ( the honest woodcutter ) is a moral story for children, which teaches them to work with honesty and understanding in the time of adversity. This story of the honest woodcutter is an old story and has always been popular among children. The Honest Woodcutter: Short Moral Story in English It was a long time ago. There lived a poor woodcutter in a small village near a forest. He used to cut dry woods from the forest and sell it in the market to complete his family's expenses. He used to get up every morning and take his ax and go to the forest near the village and cut wood. Till noon all the wood was collected and sold in the market. Some money was sold by selling wood, which led to the survival of him and his family. Everything was going well. He was happily living his life with his meager money.  Once a day, he reached the forest in the morning to cut wood. A river used to fl
Post a Comment
Read more